A quick post to showcase creatures we are enjoying here in Gopher Valley in NW Oregon.

Note: if you get this post by email, the videos will not show up. So try coming to the blog page to read.

Crickets this year are abundant.Their chirps monopolize the bandwidth of evening sound. We have two kinds: the slow-singers and the fast-singers. Perhaps bush and tree varieties. During hot late August and Sept evenings, one highly successful individual got the volume past the point of enjoyment for us mammals indoors.

In this video below you can hear the fast singer competing with the slow guys in the background. Apologies for the low res, but you can get the idea.

Evening primroses (Oenothera sp) are not a native flower, but they bloom their hearts out all spring and summer into fall and the extended color, fragrance and nectar is a gift to insects and humans. Crickets perch on the stems, light evening primrose fragrance is released into the air each night when they open after dusk. Flowers open so quickly you can see the petals move! Easy to grow from abundant seed, too.

A couple of snakes. Some gopher snakes are very tame, but others are aggressive and defensive. I found a baby on the road that gathered all of it’s 6 inches into a compact spring and leaped toward me as I stepped back from taking a photo. This big one we petted as it toured the patio methodically looking into each and every corner for some dinner, and it hardly noticed us.

A rubbery rubber boa. They are usually underneath something.

Despite the heat, good old Oregon sunshine (Eriophyllum lanatum) came up from winter-sown seed in the hedgerow-in-progress, and bloomed by the end of the summer. Thank you, best native plant friend! And that is narrow-leaf milkweed (Asclepias fascicularis) keeping right up with it. Easier to start this year than the showy milkweed, and still native to our region. Contact me if you would like growing or seed source info. 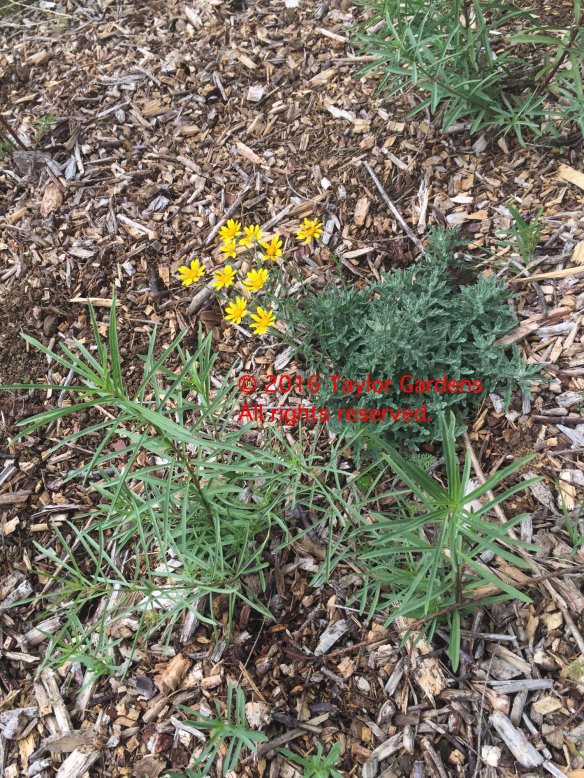 Apparently one can convince a California ground squirrel to leave the cozy burrow it constructed under your house by harassing it. So says my bible of wildlife information “Living With Wildlife in the Pacific Northwest”.

Normally, everything in this book is quite helpful. I’ve attended talks by the author. He is very experienced and knowledgeable. However, I can tell you from recent experience, it takes a heap o’ harassin’ to get a rodent to give up on good real estate, and we’re not done yet, so it may actually be impossible.

Backing up to my previous post where I thought I had an eastern fox squirrel, turns out I was wrong. After trapping and having a conversation with it as I walked it down the road, I realized it was a California ground squirrel. Although it scampers whenever it spots me, it has a distinct fearless attitude that implies familiarity, or possibly contempt. Tom decided his or her name is Buddy, and we should have it as a pet.

Anyway… why do these rodent stories always wander around like this… Buddy is indeed a beautifully decked out California ground squirrel. Note the gray shawl and checked pattern on the fur. I mentioned the houndstooth check when describing it to Tom over the phone and he wanted to know was Buddy wearing an ascot?

The good thing is, he’s native, and I don’t have to kill him. But on the other hand, that fur would look so good as a hand warmer.

Alright, so after putting Buddy at a distance, I closed up the hole to the entrance of a burrow – maybe not as thoroughly as I should have – and put some rocks to barricade it. I did not do the extensive digging and armoring that I did LAST summer on the other hole, and that may have prolonged our war of wills.

Twice a day I reposition the rocks, add a bigger one, and Buddy starts digging back in, then more rocks farther away; Buddy digs deeper than expected, etc, etc. I frequently caught him/her in the act, and he instantly scurried away. At one point he brought his spouse, offspring, or sibling to have a look – reinforcements?

Then after about a week of this he finally did what I had feared – moved to a new location and dug a fresh hole towards the old burrow. So this is where I tried part two of harassment – stuffing things in the entrance.

Some suggestions from the book (wads of paper) would be laughable in our case – I went for the ickiest one – used kitty litter. Just before I left for a couple of weeks, I noticed Buddy pushed out some of the litter so I dumped a whole lot more into the entrance. I think you have to do this for a long time. The other suggestion was coyote urine – yes you CAN buy it  – oh, and “tethering a cat or dog near the entrance”. I don’t think the cat would have a chance. If you want to know how to tether a cat, you have to read the book.

But enough about squirrels. I had a thrilling experience on one of our partly sunny days. I was collecting seeds, and was about to reach for a stem when I heard an extremely loud HISS next to my left foot. As I made my exit (no sudden movement, get the hell out as fast as possible) the thoughts that went through my head were 1) no rattlesnakes around here, at least I don’t think 2) I had no idea snakes could hiss that loud 3) do rattlesnakes hiss? 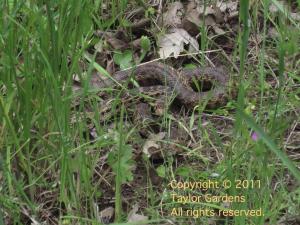 When I was at a distance I got a picture of this gopher snake. It was still hissing every time I moved and I was yards away by then. Once the adrenaline stopped coursing through my veins, I marveled at the cartoon quality of the hissing. It sounded like an Indiana Jones soundtrack. Consulting the reptile field guide, I find that yes, they do hiss and strike, but when you finally pick them up they are quite docile, and some don’t hiss – they just let you pick them up. Keep in mind these were herpetologists talking. These snakes do eat gophers and such, using constriction to do them in. Hey – maybe I could get one to come after the ground squirrel.

Come to think of it, there are a lot of cartoonish sounding critters out here: Hoot owls (great horned) actually hoot, ribbiting frogs (Pacific chorus) actually ribbit, hissing snakes (gopher), coyotes. It’s just a Disney movie every day. To finish off the cuteness, here’s a baby bunny I found in the scotch broom and a fawn my neighbor Sherry photographed.

Our adventure in restoration and natural history