Earlier this spring I realized we had accidentally created some nice habitat for western skinks, an entertaining, exotic looking little guy with a beautiful blue tail. There was a lot of driveway gravel and random small rocks piled at the base of our crumbly basalt bank. I saw one weaving in and out of the rocks, and thought myself lucky to have a long look. Then I realized there was a second one, and they were playing hide and seek and chasing each other around, oblivious to me!! Ahh, spring.

According to Reptiles of the Northwest blue color in the tail is temporary – bright on juveniles, fading to grey or grey-blue in adults. I always see the blue tail disappearing in a flash. I have no idea how Alan St. John, author of the field guide, is able to capture them. But capture he does, and writes lovingly and entertainingly of skinks and other reptiles. A great read.

Weeks later I was gardening and flushed one out of the undergrowth. It immediately dashed for a rodent hole, but poked it’s head right back out again. We had a stare down, but the skink had the better skills, because if I looked away for one second, it would advance a centimeter and then freeze. I could not see it move, but there it was, inching forward. At the right moment it disappeared into the rockpile.

These guys are fast – like other lizards they can dash so fast that they can’t be caught, but are unable to keep up the pace, so their strategy is to dash, freeze, dash, and if all else fails sacrifice their tails, which can regrow if they are detached. The detached tail even wiggles to distract the predator while its owner gets away.

You can create habitat that snakes and other reptiles use by hollowing out a protected and dry place in a sunny area and covering it with stones and a little woody material. They will find the spaces beneath and this hibernaculum will be a refuge in the winter too for slug-eating garter snakes and others. 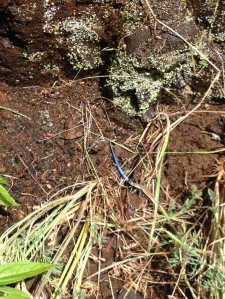 Osprey family (dad is perched nearby guarding the nest)

Birdwatching on the “boulevard” opened up by tree thinning

A short essay on my nemesis the California ground squirrel

The squirrely-est (and most beautiful) of squirrel youngsters. Is there no animal as irritating as a teenage ground squirrel? The parents must be so glad to get them out of the way. One was up on the roof CLOMPING back and forth trying to figure out how to get down (yes they climb), then the next thing I know it is making a systematic, and hyperactive circuit around the house, checking out every inch; scrabbling around trying to dig in the concrete window well, popping up to sniff the mouse traps, running around checking all the vents. Face to face with me through the glass door on the porch, scratching and chewing on the screen door. The local name for these guys is grey diggers. They are digging machines. I believe this one is hibernating under the house at this moment. Sleep well my friend, we will duel in the spring!

The turkey vultures are back in the Willamette Valley. Familiar circling objects in the sky, sometimes first perceived by a passing shadow overhead. As this piece in Conservation Magazine notes, vultures’ decline worldwide could signal another hole in the safety net of ecosystem services that keep humans alive.

This fine portrait of vultures in the Neighborhood Naturalist reveals that the Cherokee call them “peace eagles”, and that the turkey vultures in the Americas are not closely related to those in Africa, Europe, and Asia, but to storks and flamingos! (Click down to page 3 for the vignette on vultures.)

Apparently one can convince a California ground squirrel to leave the cozy burrow it constructed under your house by harassing it. So says my bible of wildlife information “Living With Wildlife in the Pacific Northwest”.

Normally, everything in this book is quite helpful. I’ve attended talks by the author. He is very experienced and knowledgeable. However, I can tell you from recent experience, it takes a heap o’ harassin’ to get a rodent to give up on good real estate, and we’re not done yet, so it may actually be impossible.

Backing up to my previous post where I thought I had an eastern fox squirrel, turns out I was wrong. After trapping and having a conversation with it as I walked it down the road, I realized it was a California ground squirrel. Although it scampers whenever it spots me, it has a distinct fearless attitude that implies familiarity, or possibly contempt. Tom decided his or her name is Buddy, and we should have it as a pet.

Anyway… why do these rodent stories always wander around like this… Buddy is indeed a beautifully decked out California ground squirrel. Note the gray shawl and checked pattern on the fur. I mentioned the houndstooth check when describing it to Tom over the phone and he wanted to know was Buddy wearing an ascot?

The good thing is, he’s native, and I don’t have to kill him. But on the other hand, that fur would look so good as a hand warmer.

Alright, so after putting Buddy at a distance, I closed up the hole to the entrance of a burrow – maybe not as thoroughly as I should have – and put some rocks to barricade it. I did not do the extensive digging and armoring that I did LAST summer on the other hole, and that may have prolonged our war of wills.

Twice a day I reposition the rocks, add a bigger one, and Buddy starts digging back in, then more rocks farther away; Buddy digs deeper than expected, etc, etc. I frequently caught him/her in the act, and he instantly scurried away. At one point he brought his spouse, offspring, or sibling to have a look – reinforcements?

Then after about a week of this he finally did what I had feared – moved to a new location and dug a fresh hole towards the old burrow. So this is where I tried part two of harassment – stuffing things in the entrance.

Some suggestions from the book (wads of paper) would be laughable in our case – I went for the ickiest one – used kitty litter. Just before I left for a couple of weeks, I noticed Buddy pushed out some of the litter so I dumped a whole lot more into the entrance. I think you have to do this for a long time. The other suggestion was coyote urine – yes you CAN buy it  – oh, and “tethering a cat or dog near the entrance”. I don’t think the cat would have a chance. If you want to know how to tether a cat, you have to read the book.

But enough about squirrels. I had a thrilling experience on one of our partly sunny days. I was collecting seeds, and was about to reach for a stem when I heard an extremely loud HISS next to my left foot. As I made my exit (no sudden movement, get the hell out as fast as possible) the thoughts that went through my head were 1) no rattlesnakes around here, at least I don’t think 2) I had no idea snakes could hiss that loud 3) do rattlesnakes hiss?

When I was at a distance I got a picture of this gopher snake. It was still hissing every time I moved and I was yards away by then. Once the adrenaline stopped coursing through my veins, I marveled at the cartoon quality of the hissing. It sounded like an Indiana Jones soundtrack. Consulting the reptile field guide, I find that yes, they do hiss and strike, but when you finally pick them up they are quite docile, and some don’t hiss – they just let you pick them up. Keep in mind these were herpetologists talking. These snakes do eat gophers and such, using constriction to do them in. Hey – maybe I could get one to come after the ground squirrel.

Come to think of it, there are a lot of cartoonish sounding critters out here: Hoot owls (great horned) actually hoot, ribbiting frogs (Pacific chorus) actually ribbit, hissing snakes (gopher), coyotes. It’s just a Disney movie every day. To finish off the cuteness, here’s a baby bunny I found in the scotch broom and a fawn my neighbor Sherry photographed.

Ethical Birding and Nature Study in Oregon and beyond