It’s hard to get a lot of “work” done because I find so many things that necessitate a trip to the bookshelf to look at one field guide or another. One day earlier this spring I was raking leaves to mulch some plants we put in for butterflies, and I found three interesting things: 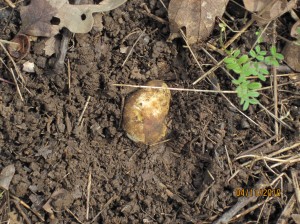 1. A truffle. Raking is one method to find truffles. I uncovered this one under an oak as I raked up leaves.

Truffles are the fruiting bodies of fungi, found in the layer of duff on the forest floor, or just below the surface. They are related to mushrooms, but have evolved a different strategy for dispersal. They form underground. When their spores are ripe, truffles give off an enticing aroma which signals to squirrels and rodents that they are ready to eat and the animals dig them up. The spores pass through their digestive tracts intact and are spread around in their feces.

All truffle-producing fungi participate in a mutually beneficial mycorrhizal (literally fungus-root, from Greek) relationship with plants. This is essential for plants’ survival. The fungus is composed of threads, or hyphae that form a sheath around, and in some cases penetrate, the cells of tree roots. The hyphal threads provide a large surface area and extensive system for gathering nutrients and water which are exchanged with the plant for carbon. They also protect plants from pathogens.

One study found 40 species of fungi associated with Oregon white oak roots, 18 of which are truffles. Researchers hypothesize that truffle spores spread by rodents make it possible for oak seedlings to stay alive after they germinated far from its source of fungi around the parent plant (more info here http://rparticle.web-p.cisti.nrc.ca/rparticle/AbstractTemplateServlet?calyLang=eng&journal=cjb&volume=87&year=0&issue=9&msno=b09-044)

In Oregon, there is a buzz about truffles because there are two or three native species that some consider to be as good as the expensive European delicacies. Unfortunately the one I found is not one of these. The glamorous three species naturally associate with younger Doug firs – in Christmas tree plantations and tree farms. The catch is that unless you harvest them when they are ripe, their culinary value is low (people without specialized knowledge dig up the resource and disturb the fungal threads, thus potentially destroying the resource). The solution to finding ripe ones and leaving the rest to mature is to use an animal with a better nose than you have. Training dogs to hunt truffles is of interest currently, and you can see one in action here: http://www.oregonblacktruffles.com/zoe_trufflehound.html

The truffle info above is contained in either a great new Field Guide to North American Truffles, by Matt Trappe, Frank Evans and James Trappe, or the North American Truffling Society website http://www.natruffling.org/ where mycologists have provided a rich trove of information and links.

2. This wolf spider got scooped up in the oak leaves and it stood out because of the blue egg sac it was carrying around. These spiders don’t have webs. The babies climb on the mother’s back after hatching and stay there until they molt. The spider is quite small – less than 1/2 inch, and the egg sac is almost as large. Notice the long legs to get around in the grass more easily. I was able to locate a wonderfully helpful website, http://www.spideridentification.org where anyone can send photos of spiders for i.d. and get great information from generous and friendly experts. Boy, I love the internet. Even if spiders give you the creeps, this is really an entertaining site! My submission got a quick response with the following information:

“I actually believe this to be of the Pardosa genus, rather. Although the two genera, Pardosa and Pirata, are very similar, the carapace design of Pirata is pretty unique and I don’t think it matches this mama’s. There are nearly 100 species of Pardosa in North America and they are all very similar to one another so, as Eric said, one really needs a microscope to tell the species apart.

Some life history: Spiders of the genus Pardosa are small to medium-sized. Because of their relatively long, slender legs, they are sometimes called “thin-legged wolf spiders”. The body is carried high, and this helps them to pursue prey in open, often grassy or stony ground. Many are characteristic of marshes and fields, tundra and talus, and open conifer forests. The egg sacs of these spiders are distinctively pill-shaped and often bluish or greenish. The total body length (without legs) of these spiders ranges from 3.8-10.7mm. Pardosa is one of the largest of spider genera, comprising an estimated 450 species around the world. None of those species have medically significant venom.

3. A Northern Alligator Lizard. Along with a more colorful Oregon alligator lizard, these are one of our reptile residents.