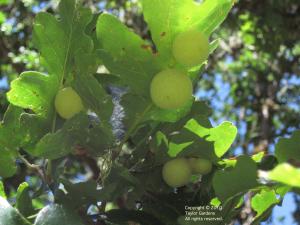 2016: Reposting something from the archives here, because of an article in the news. Forest Bathing has become a tourist activity around the world!  http://www.seattletimes.com/life/travel/forest-bathing-a-mindful-walk-in-the-woods-no-getting-wet/

2010: Many plants sport growths (galls) caused by insects, and Oregon white oak has some spectacular large stem galls, as well as smaller, more fragile leaf galls. Here’s what the US Forest Service  has to say:

“Many gall wasps are found on oaks; those prominent on Oregon white oak include Andricus californicus, which forms large, persistent, applelike galls on twigs; Bassettia ligni, which causes seedlike galls under the bark of branches that often girdle and kill the branch; Besbicus mirabilis, which forms mottled, spherical galls on the underside of leaves; and Neuroterus saltatorius, which forms mustard-seed-like galls on lower leaf surfaces that drop in the fall and jump around like Mexican jumping beans caused by activity of the enclosed larvae.

Adults lay eggs in the leaves, twigs, or bark and the developing larvae signal the plant to produce the galls. According to A Field Guide to Insects and Diseases of California Oaks

Gall wasp larvae can apparently only induce galls in undifferentiated meristematic or cambial cells, [blogger’s note: these cells at the tips of growing points on the plant have not received the hormonal signal to become a particular type of tissue so the wasp larva is superceding the plant’s signal] so female wasps must lay eggs in specific host tissues (buds, leaves, etc.) when the tissues are at the correct growth stage.

Developing larvae produce substances that induce the plant to form a larval chamber of a structure that is unique to the wasp species and generation. The gall wasp larvae typically remain small while they induce the gall to grow rapidly. As the gall nears its mature size, larvae feed on nutritive tissue produced in the center of the gall and begin to grow rapidly. As the larvae mature, they induce lignification of the gall. In detachable galls, lignification may induce the gall to fall off the plant.

Larvae pupate within the gall and adult wasps emerge from the galls to initiate the next generation.

The galls on the leaves in the photo above, formed by egg laying of the delightfully named Besbicus mirabilis are relatively new. At the center is a tiny hard nodule that contains the larva or, at this stage, perhaps the egg. Surrounding this is some white web-like porous tissue, all inside the thick-walled shell of the gall.

I found several large stem galls broken open on the ground recently, as if a bird or squirrel had been snacking on the larva inside. I took a stem gall – the one called an oak apple – from a cluster on an oak twig and opened it up. Suspended in the pithy tissue was a very hard round object. Inside this were two chambers full of wasp larvae you can see here [warning: close up of insect larvae, might remind you of maggots – skip ahead if you prefer!] 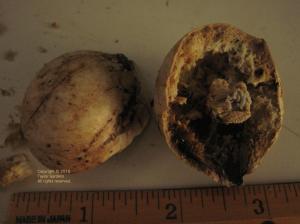 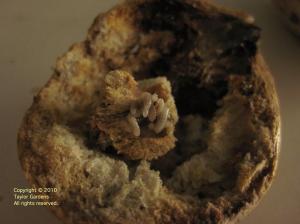 Hyper-parasitism – a parasite of a parasite – is not unusual in the insect world; parasites of caterpillars are themselves parasitized by even tinier wasps. So, besides the resourceful animals that know to break open these galls to get to the larvae, there may also be other wasps that lay eggs inside these larvae. Considering the armoring (both the outside of the gall and the chamber), it would be interesting to find out if there are any wasps that have evolved to gain access to these larvae.

You may be surprised by the females’ ability to reproduce without mating – this is also common in the insect world, especially among the species that have large population booms like aphids (born pregnant – not kidding!)

Okay, that was scientific. Now for the sublime:

While we were taking a break from sawing up a pile of slash from the restoration logging, I heard a woodpecker and walked toward the woods to get a closer look. We looked across a ravine at a downy, or a hairy woodpecker (according to Tom, who is the bird identifier) as it vigorously pecked away at the bark of an oak, possibly extracting insect larvae or beetles – organic pest control via the food web.

As we stood there, I was reminded of a great story in the NY Times about a study in Japan on the beneficial chemicals exuded by trees. The unfortunate scientific moniker applied to these wonderful substances is phytoncides, which sounds like something that kills plants, but actually was coined to mean “killed BY the plant”. These protective chemicals, produced to ward off insects and disease, have been found to benefit humans in subtle ways by regulating physiology and feelings of well-being.

Japanese researchers have been quantifying these effects, but the benefits of trees have not been news to the Japanese or many other cultures, which for millenia have recognized and sought out deep tree-connections).

The term for soaking up beneficial effects by spending time in the woods is Shinrin-yoku or “forest-bathing”. To me this is a good description of the sense of well-being and mental relaxation you get from immersing yourself in the forest experience. As Tom pointed out, all the time we spent in trees during our evolution should still influence our biology.

Gazing at a stand of oaks in the summer sun as their mature leaves reflect the light, is a qualitatively different experience from looking at conifers – which are a flat green whose needles seem to absorb light. The reflected green light of the oaks produces a corresponding lightness of being. Savoring this delightful moment, I was glad I had taken that break to get out of the blazing hot sun, and wandered off to look at a woodpecker. 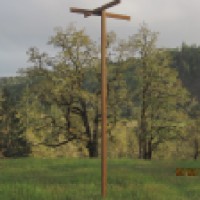 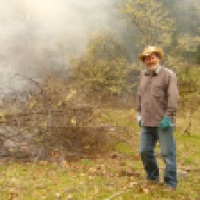 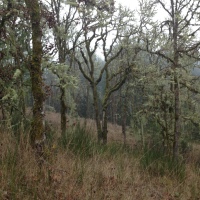 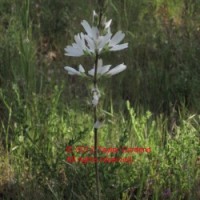