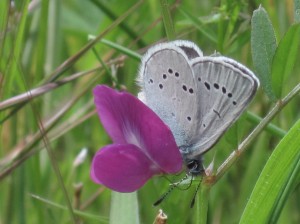 Well, this is not one of them. However, this Silvery Blue butterfly (Glaucopsyche lygdamus) looks very similar to the endangered Fender’s Blue (Icaricia icarioides fenderi).  But Fender’s blue has a row of faint markings, at the edge of the hindwing, like ghosts of the dark spots.

I was ecstatic the first time I saw a Silvery Blue until I learned about the second row of spots. I still am very enamored of these guys though. You have to wonder why the flamboyant STRIPED antennae? Such wonderful details!

Our oak savanna and woodland project probably would not have been supported were it not for the Fender’s Blue. Support for habitat improvement often comes in the form of money for the management of endangered species. Once a species is on the endangered list, the agencies responsible for watching out for them are required to come up with a plan to bulk up the population – plant or animal – and try to make it possible for them to reproduce and expand on their own (the official term is “recovery”).

Our project is providing more habitat close to existing Fender’s Blue populations, and I have planted the preferred food plant of the larvae – Kincaid’s Lupine. Kincaid’s Lupine is a plant that needs an upland prairie or savanna habitat, and is one of those species that is disappearing with the oak habitat – it is designated as threatened in some areas, endangered in others. My lupines are still small, but here are some of the current crop I am still trying to establish (not as fantastic looking as the butterfly, I know). 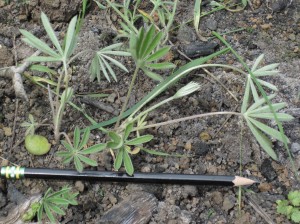